Defining Victory As Something Other Than Pure Results 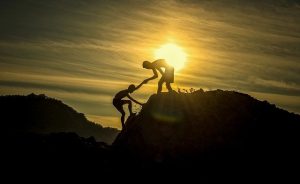 I’m sure many of you believe I’ve never been involved with losing or failure because I’ve written so many articles about Winning Culture, Success, and Creating Win-Win Situations, among other topics.

Nothing could be further from the truth; I’ve had a number of setbacks, far too many to be honest, but I want to talk about one of them today.

When we started the season, we knew that wins were going to be hard to come by as the competition had been split into two divisions, and surprisingly, we had just made it into the top division.

This was bad news for us, as all the teams we had beaten the previous season were now in division 2, which meant this was going to be a long hard season, and even with the most positive spirit in the world, it was going to be tough as we just weren’t a good team.

During our first few training sessions, this became clear to us; our lack of size, lack of talent; and playing experience as a group was just too thin.

As the captain of the team, and one of the key leaders, I met with the other leaders of the team and the coach to discuss the situation and how we would look to motivate the team.

Our conclusion was clear; we were looking at finishing bottom of the league and there was serious doubt as to whether we would be able to complete the season, as the players would quit, due to getting badly beaten every week.

It was our coach surprisingly who came up with a plan, he said “guys, we are the worst team in the division, I have no idea where our first win is going to come from, so we need to change our approach. Our goal is to be the team that enjoys this season the most, now we can’t do it on the pitch but we can look to do it off the pitch, we will be the team that laughs the most, sings the most and drinks the most. Those are our goals for the season.”

We all looked at one another, were silent for a minute, and then we laughed. We knew we didn’t have an alternate plan, so we agreed that those would be our goals.

We called a team meeting where we announced the goals for the team.

To our surprise there was a lot of relief in the room, the unrealistic expectation of finishing other than dead last had been removed. We were conscious of our limitations and we had decided to accept them, but to then change the rules of the game we would play.

Our enjoyment of the season would come not from winning games but off the field. Now we knew this was going to be tough as defeat is a celebration killer, but we accepted this challenge.

The outcome was that our playing record was played 26, won zero, lost 26.

We were beaten by 50 points or more on 7 occasions, we even set the league record for a defeat.

I remember that game as if it were only yesterday; at half time we were 50-0 down.

Our coach said, “Guys you’re 50-0 down, you now have to play uphill, into the wind against a bigger, stronger and better team. Now go out there and enjoy yourselves.

In the dressing room after the game, we laughed and we sang in celebration of the record defeat, the other team was completely confused, how could we lose by such a record score and still look like we had enjoyed ourselves.

We completed every game of the season, not one player quit, on the contrary, at the end of the season we had increased the size of our squad. In spite of getting beaten our team was known for having a great time.

In previous years I have played for teams that have won cups, won league titles and even gone undefeated, but never have I experienced the level of camaraderie or team spirit of the team that we had in that team.

In fact, I would say that was the season that I enjoyed more than any other.

So in the final analysis even though we had lost every single game, finished bottom of the division, we still felt like winners.

Sometimes we need to define winning as something other than just pure results.