“The Positive Thinker Sees the Invisible, Feels the Intangible and Achieves the Impossible”

This is one of my favourite quotes and is something that I genuinely believe.

I often say ‘the first step on the path to success is trying’, but we will never really try unless we have a positive attitude and believe we can do it.

If we start something without believing we will be successful, then we are not really trying, we are just going through the motions with quitting already in our minds.

When I talk about trying, I am talking about really giving it a go, believing that if you give it your best shot, then you have a chance of success.

That doesn’t mean success is guaranteed, but if you try not believing you will succeed, then failure is guaranteed.

How do we remain positive, and retain the right attitude?

Personally, I often think that this is part of our character, although if we have sustained periods of success people’s confidence levels will improve.

As leaders we need to have that characteristic; if we do not believe we will be successful, then why should others follow us?

We need to have confidence in ourselves, and in our team, in order to inspire them and increase their confidence.

One of the toughest staffing decisions is to remove people from the team who bring negativity, breed doubt and sap the confidence of others.

This doesn’t mean we should not allow people to raise issues, or highlight risks, we should welcome this as it might help us avoid challenges which would stop us from succeeding.

But, people who only see problems, constantly complain, and doubt the direction, these we should remove quickly – as they undermine our chances of success. 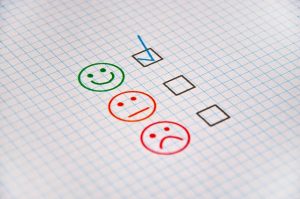 I remember a story about the England Rugby Union team who prior to the world cup in 2003 went on an Army Training course, to increase their fitness and do some team building.

At the end of the weekend, the England coach asked the Army instructors what they thought of the session and of the teams’ fitness levels.

The lead instructor asked, do you want me to tell you where your real problems lie, or just talk to you about the fitness of the team?

The coach was taken aback by the answer, but said “no tell me what the real problems are”.

The instructor said, “of your more experienced players, there are 2 or 3 of them whose attitude is poisoning the attitude of the entire squad”.

“They are senior players, so the others listen to them, but they are always looking for problems rather than solutions, they are the first to complain and are the first to quit when the going gets tough. In my opinion, you will not win the world cup if they remain in the team, they are undermining what you are trying to achieve”.

The coach looked at the instructor and said “thank you, there has always been something about them in the back of my mind that I couldn’t quite explain, but this is it exactly”.

The coach took the difficult decision to drop those players from the world cup squad, even though they were very good players that he needed because what he didn’t need was, their negative attitude.

Obviously, there was some shock and surprise, but I am sure within the squad there was a relief, nobody really likes negativity.

England went on to win the World Cup, and the coach often highlights that change in personnel as a key moment on their journey.

A positive attitude is everything, and when we have people bringing negativity, then we should remove them, and remove them quickly. The rest of our team will thank us for this.

Have you ever experienced people who brought negativity?

What did you do to counter it? How did it impact your project?