When The Going Gets Tough, Keep Going 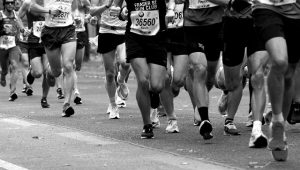 Winston Churchill once said “When you’re going through hell, keep going,” and it’s one of my favourite quotes.

It’s a simple concept, but while you’re going through hell, it’s all too easy to lose sight of it and give up; if you do, you’ll end up trapped in hell, which isn’t a good outcome.

It is our responsibility as leaders to keep people focused on the goals in order to accomplish success, especially when things get tough.

That’s when leadership is needed the most, we are guides, coaches, motivators and supporters.

It’s our job to remind them of the tremendous progress already made: how far we have come; how far is left to go; and our strong belief that they can do it.

I recently heard another great quote, this was in regard to a candidate in an election being held somewhere, “he’s the type of leader who when he sees the light at the end of the tunnel, he buys more tunnel”.

I always like to add examples in topics and today is no exception, but rather than mention some tough project I helped see through to completion, I wanted to mention something different.

I think I would call it a leadership application.

One of my ambitions in life was to never ever run a marathon, but recently with a number of friends going through chemotherapy, I have decided to run a marathon in order to help raise some money for a cancer charity.

As an over 50, whose glorious sporting history is but a dim and distant memory, this is going to be a challenge. When I decided to do this, I don’t think I realized exactly how far 26 miles was otherwise I might have decided on something else, but a commitment is a commitment.

One of my closest and dearest friends has also agreed to do this with me, and being a techie, he has supplied me with some performance measuring hardware and shown me a free application that I can put on my iPhone.

I can honestly say I did not believe that this was going to help one little bit.

However, as I say this is a leadership application, probably one of the first.

When I run, the application lets me know my progress, it encourages with comments such as not too far to go, the last mile, and if at any time I feel I am starting to weaken in terms of my performance I can press my power song button and it will play one of my power songs to motivate me.

So if you see me running by and you hear “Eye of the Tiger” then you know that I am going through hell, and that song will help me keep going.